Over 1,000 people took to the streets of Phoenix on a hot Friday night to protest numerous issues associated with the police in the wake of the killings of Alton Sterling and Philando Castile.  While the march took to the streets, it was largely self-policing, aside from a notable confrontation with a Trump supporter who had to be escorted from the rally by police after he was knocked to the ground.

The mood of the march changed after a group of armed militia, who had shadowed the march, began to run ahead of the march, at one point cutting through the front of the march. The crowd gave chase to the militia but was stopped when officers in riot gear were driven into the fray to help the camouflage wearing militia men escape, providing marchers with the first look at the plans the Phoenix PD had in place for those who stepped out of line. I yelled at the militiamen as they had ran by, and then complained about the armed group aloud, three older women were walking next to me, one said that they all had wanted to bring firearms to the demonstration, but the march organizers had insisted that attendees leave all weapons at home. 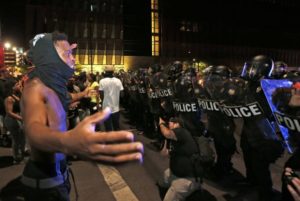 While much has been made locally since the march as to whether a march
organizer tricked the crowd to march towards the I-10 on ramp, I overheard a number of people in the crowd (mostly younger people) call for the freeway to be taken. Some of these same voices were also denouncing the march leadership.

Once the march turned onto 7th St. to head north to the freeway, a large presence of police were visible, creating a skirmish line across 7th St. and Fillmore. While some of the march organizers’ people tried to divert marchers from a head on confrontation with police by turning the march onto Fillmore, many younger people surged forward to the shields of riot police. Water bottles flew through the air at police, some of those in conflict removed their shirts and used them to conceal their identities as the Phoenix PD’s mobile surveillance unit “Freedom on the Move” sat parked well behind the police line with a raised camera high over the crowd to record the coming conflict.

The cops sprayed the crowd with pepper spray, causing hundreds of people to turn and run from the skirmish line. As many laid in the street, some screaming, as they dealt with the effects of the spray, others were being lifted off of the crowd, or helped from the ground as they had been trampled by the crowd in retreat.  Soon water bottles gave way to rocks, and the Phoenix PD declared the march to be an illegal assembly.  March organizers scrambled to move the crowd away from the police line as the conflict intensified, and the pleas to stop the confrontations with police fell on many deaf ears.

As the march finally moved away from the police line, much smaller than when it had first arrived as the police dispensed liberal amounts of pepper spray, it appeared that the march organizers had succeeded in diverting the crowd back to the core of the downtown Phoenix area. A group of people towards the front of the march broke away and pulled the rest of the march with them down a side street, an attempt to bypass the police line and make it to the freeway. 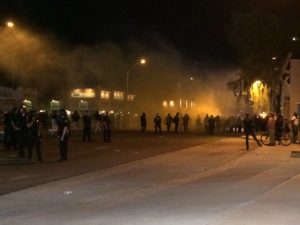 I could see police running up 7th St. and police vehicles making hasty u-turns to assemble a skirmish line at 7th St. and Roosevelt, the crowd ran too. Some were picking up rocks from dirt lots, others snapchatting and calling friends to tell them what was going down in Phoenix, and other stood in the way of police vehicles that had yet to make it north of Roosevelt. While there were only three arrests Friday night, there were dozens of people who unleashed rocks on the reassembled line of riot police blocking the street north of Roosevelt, while a police helicopter flying overhead made periodic announcements regarding the order to disperse. More people arrived, some jumped out of cars, maybe after a phone call from a friend or after watching the fights on the news, many grabbed the biggest rocks they could find to heave at police lines.

The police responded with tear gas, pepper balls, and more tear gas. Some of the tear gas was thrown back, but the amount of chemical weapons deployed had the desired effect of breaking up what was left of the crowd.

I arrived late to the march with pretty low standards, considering the reputation of the march organizer, and the warnings put forth by both the Mayor and Chief of Police to cancel the demonstration in the wake of the Dallas shootings.  I didn’t hear anyone say a word about Dallas that night, a night that saw the largest confrontation with the Phoenix PD since the anti-Nazi rebellion against the National Socialist Movement in November 2010. The last time there were anti-police violence demonstrations of this size was in December 2014, just days before the bullets of an assassin targeting NY cops caused many to retreat from their agitation against the agents of the state.

Unlike the December 2014 demonstration, this was considerably less white, perhaps an effect of the Dallas shootings, as the march was overwhelmingly black and brown, minus the consistently conservative input from white allies and activists. 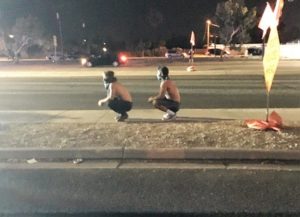 Finally, the media, the march organizer, and the police did their best at minimizing the scale of the hostilities towards police, reducing it to the actions of the three people arrested on Friday night. The police touted the low number of arrests as an example of the department’s close ties to “the community,” while the protest organizers slandered the arrested on TV the next day. For my perspective, what happened on Friday was significant because those fighting the police refused the leadership of clergy and politician, the authority of the state, and the expectation to self-police in the midst of an unfolding national crisis. Phoenix is a poor town, second only to Detroit for the level of poverty, this poverty is shared unequally among the indigenous, black, brown, and white residents of this doomed metropolis on these occupied Akimel O’odham land.

A social explosion is long overdue.