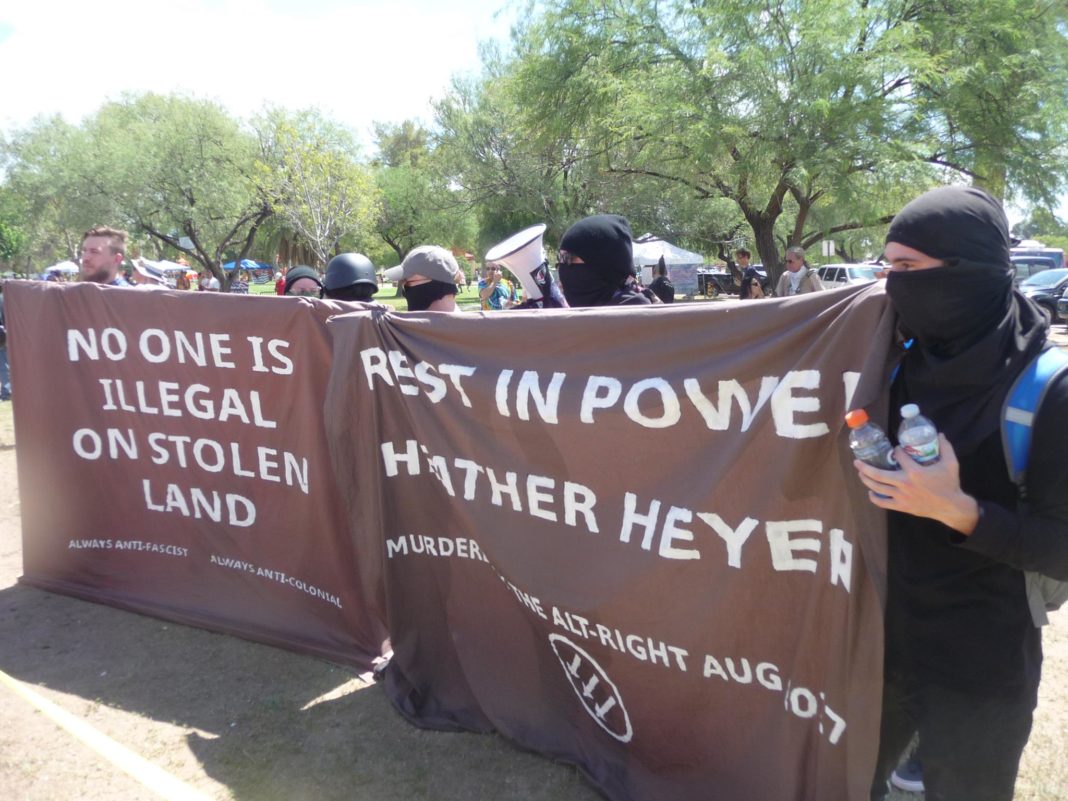 Report back from anarchists opposing the ‘Resist Marxism’ rally in Tucson, Arizona this past weekend.

On 8/18 an Alt-Lite group by the name of Patriot Movement AZ (PMAZ) held their second rally in Tucson in just two weeks. The first rally on 8/4 largely flew under the radar of anti-racist organizing in Tucson, but a few of us went to scout it and found a surprisingly large crowd of fascists, would-be militia members, Trump worshipers, and Alt-Right trolls who crawled out from their internet havens into the Arizona sun.

While it was alarming to see that they had organized a rally of forty or so people and we had failed to meaningfully mobilize against it, this scouting trip produced photos of their use of the proto-Nazi “Kekistani” flag, which would prove instrumental in our organizing against their rally set for the 18th.

On the morning of the 18th a lot of us were feeling rather nervous, as there had been a litany of threats from PMAZ in the intervening weeks, most of which boiled down to some variation of “if any of you antifa tries to get in the way of my free speech and I’ll shoot you with one of the many guns I’m going to be carrying.”

Thankfully, we quickly built up our confidence as the counter protest’s numbers swelled to maybe two-hundred to two-fifty, easily outnumbering the fascists by at least 4 to 1. A blow-by-blow of everything that happened over the course of the 3 hour event would probably be a bit long, but here are a few key reflections.

As the event got underway, the Tucson Police (TPD) attempted to create a barrier that would separate counter-protesters from the area where the fascists were gathering by about fifty feet away. After the crowd repeatedly went around metal barriers, tore down police tape, and approached the fascists from multiple angles, TPD was forced to tightly encircle the area with metal barriers and line them with cops. Not only did this make the relationship between the police and far-Right organizing clear, it also allowed the crowd to get close enough to disrupt any speeches the fascists tried to make.

It seems like the crowd was able to disobey police orders with ease in part because there were a number of distinct groups that were each able to bring a particular tone to the approach of ignoring police orders—the block bloc, the clown bloc the marching band, and the circus performers. A representative interaction went something like this: the black bloc is staunchly refusing to move as TPD approaches with metal barricades, then, just as some cop is giving a particularly stern order, the clown bloc arrives, tripping over police line they’ve managed to put up and meandering in between the angry police and the black bloc. Meanwhile, the marching band is playing a triumphant tune and walking around the barricades with people following in one direction, and people on stilts are ambling around them in another direction. Disobeying police orders came to be an acceptable approach regardless of the tone of any given participant.

Police were seen as institutional extensions of the white supremacist rhetoric espoused by PMAZ by much of the crowd, and this was made clear in a number of interactions. Throughout the day, many counter-protesters yelled at the police for protecting the fascists, but the exchanges got particularly heated as the police escorted PMAZ members to their cars at the end of the rally. Someone with a megaphone pointed out the way TPD collaborates with Border Patrol as evidence of their investment in the existing racial hierarchy, and the crowd chanted “fuck the police” as the cops held back angry counter-protesters from the last gaggle of fascists hastily packing their cars. After PMAZ left, TPD began debriefing in the area that had been home to the alt-right rally only minutes before. After some vicious mocking, they marched across the park to go debrief somewhere else.

Finally, we are happy to announce that de-arresting became somewhat normalized at the event! (Hooray! Wooo! Huzzah!) As the last fascists were trying to leave in their cars, there was a bit of a scuffle with some folks who had marched into the parking lot to block them. Seems like a PMAZ car bumped a protester and the people inside threw water on him, and the crowd responded by throwing water bottles—one of which might have hit a cop! In the following moments, a cop grabbed the person who got bumped by the car in a choke hold, but folks in bloc pushed the cop off, and masked and unmasked folks alike grabbed him back into the crowd and linked arms to protect him. Throughout the day counter-protesters were pulled back from the police on three separate occasions, each time with the participation of the wider crowd. Let’s keep this up!

One last beautiful moment: as the police were marching across the park to find a new place to debrief, some guy in another ramada a few hundred feet away started blasting NWA’s “Fuck the Police” over a P.A. at them. He had a microphone too, and yelled “what kind of donuts are you gonna eat later?!” Turns out he wasn’t even there for the counter-protest, he just happened to be in the park with a P.A. and when he saw sixty cops walk by that was his first impulse. Wow!