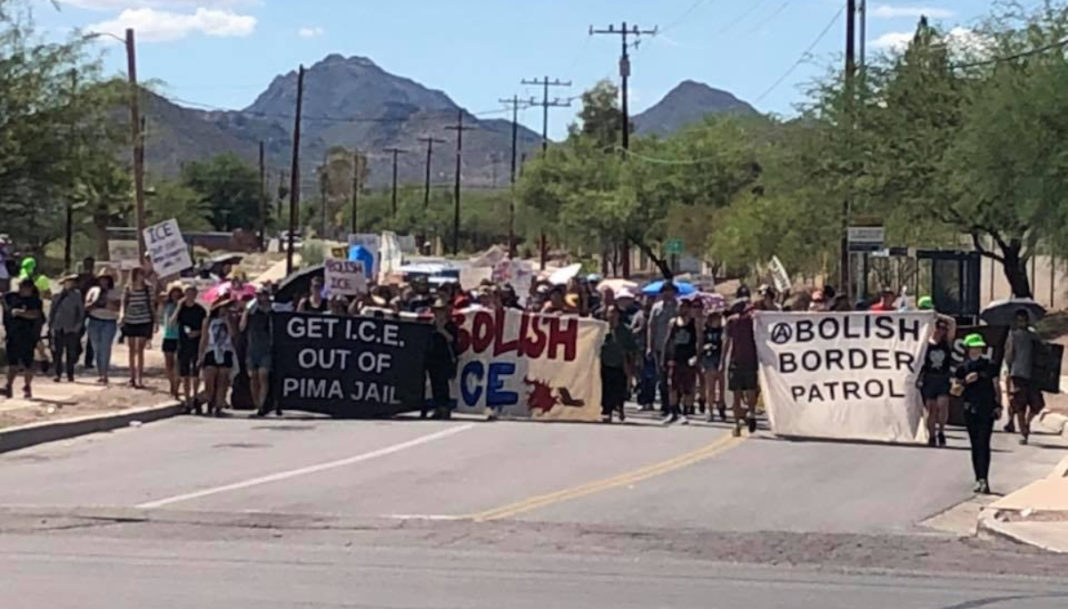 Report from anarchists in Tucson on a recent march and blockade of an ICE building.

On Saturday, August 25th a group of over 100 people gathered in a park a few blocks away from the local jail in Tucson, Arizona, occupied Tohono O’odham land, in response to a call for a march to “evict ICE” from the Pima County Jail.

After a free meal from Food Not Bombs, the crowd took to the street, eventually marching onto busy Mission Road and blocking traffic. In front of the main entrance to the jail, the crowd split into two groups and moved to block both access roads to the jail employee parking lots. Thanks to some dedicated research and scouting, we knew the jail’s shift change occurs daily at 3 p.m., and the timing for the march was planned accordingly—by 2:45, all routes in and out of the corrections officer parking lot were blocked. The crowds held down these access roads for over an hour and half, thoroughly interfering with the normal operation of the jail.

Corrections officers trying to go home after the shift were trapped inside (except for a few who jumped a curb at high speed with their cars dangerously close to some demonstrators), and those arriving to start work had to be redirected a number of different times by Tucson Police, eventually parking in a neighborhood across a busy road from the jail and being forced to walk into work.

At around 4:30, the crowd gathered in the middle of the street in front of the jail to hear speakers explain the connections between settler-colonialism and ICE, share personal stories of how collaboration between local law enforcement and Border Patrol has ripped apart families here in Tucson, and decry the racialized violence of incarceration. The events of the day ended with a tired but triumphant return march to the park.

The police showed up at the park before the march got underway and spent half an hour asking around to speak with an “event organizer.” In the past, this has been an effective tactic by the local cops to find a person they can put pressure on to control marches when they’ve gotten rowdy. On Saturday, everyone just ignored their questions, and eventually they left the park.

The timing was great and we definitely thoroughly disrupted the jail’s change of shift. The crowd was also very adaptive, so when folks noticed that Tucson Police were directing incoming guards into the visitation parking lot, people set up a soft blockade there as well: cars visiting their families could come in, jail employees could fuck off.

Things that could have gone better:

Midway through the march, some folks attempted a banner hang by throwing weighted ropes over a traffic light, but unfortunately the ropes got tangled together at the top, and it wasn’t possible to hoist the banner. It was really exciting to see this sort of clandestinely planned escalation mid-march, but it was a shame the banner didn’t end up on the traffic light.

While the messaging throughout the day was mostly really good—chants of “la policía, la migra, la misma porquería!” and “police, ICE, the same shit twice!”, jeers at the guards who eventually made it to the jail to “quit your jobs,” and a lot of connecting the short term goal of evicting ICE from the jail to broader visions of ICE, police, and prison abolition—there was an unfortunate lack of focus given to the prison strike. It was only mentioned once in passing by a speaker, but it seems like this would have been a great opportunity to talk about ongoing struggles inside of prisons throughout the country.

All said, it was a powerful march and blockade. Here’s hoping this marks the beginning of a trend towards escalation and interruption of the infrastructure of domination. The cops have been pretty hands off lately, let’s take this breathing room and run with it!